A post on RacingWest brought up improvements racers would like to see at Evergreen Speedway. Here's what I'd like to see (but unlikely). A 3/4 mile tri-oval, non-symmetrical, slight banking (about 10 degrees), pit facilities, seating for around 40-50,000. AND the new configuration would need to facilitate the current program as well. I think it would look something like this: 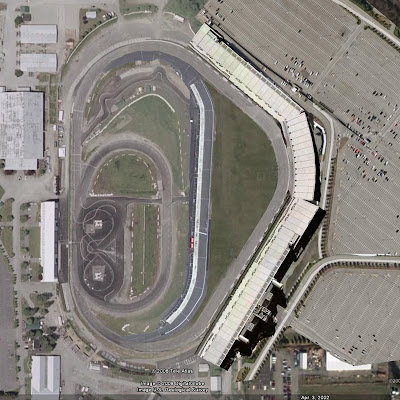 This would bring at least the Truck series back, and likely a Nationwide race. I doubt a Cup race, because the powers that be only like 1.5 mile tracks that cost $150 million or more. Besides, I'm secretly hoping the Cup will add another road course event and have it in Portland. Hawt.
Posted by Mike Bull at 12:01 PM No comments:

Technology...It's not always a good thing

Here's a blog writer that is amazing. Because he's hardly socially polite. He calls it as he sees it. It's Mark Cuban, owner of the Dallas Mavericks basketball team. He started Broadcast.com and sold it to Yahoo for CA-CHING! He has some great points about finance, CEOs, technology direction and more. He also isn't afraid to post what he goes through as a team owner, especially controversial player actions. I'm not linking because it contains the worst of our nation. So if you're really interested, go to his blog and read about it. It's been weeks ago.

Okay. So HP is spending a lot of coin pushing touch screen computers. Oooooooh. Aaaah. Do two things. Touch your monitor in the upper right corner right now. Now touch the monitor in the lower left corner. Imagine doing that 300 times a day. I'm not saying that is the extent of touch screen technology, or that is the sole purpose. But overall, touch screens are not for home computer use as a main method of computing. For those with physical problems that make standard computer use difficult or impossible, yes, touch screen technology is wonderful.

Touch screens have a specific set of uses, none of which I believe is destined for wide-spread adoption. Artistically it can be used for drawing. We already have Tablet PCs, and we all know how well those sell.

Using a keyboard is faster to navigate a computer. A mouse makes nearly everyone capable of navigating a computer. Keyboard shortcuts, if taken the time to learn them, would improve speed of navigation. Touch screens do the exact opposite. Games may be easier, like solitaire, but we're all lazy. No one wants to come home from work and become a mummy operating a computer.

The sad fact is the novelty of touch screens will outweigh intelligent decision making.
Posted by Mike Bull at 11:40 AM No comments:

So who knows what show replaced Seinfeld when Jerry "retired" from TV? It was 1999-2000 season if you need a hint.

I was searching for the lineups for the past and amazingly, wikipedia had a page referring to NBC's Thursday night lineup for the past two decades. What's funny is the first half of the table there aren't a lot of changes in the lineup. In the 90's there is a change nearly every year. Only 4 years did NBC go without changing the lineup since '91.

I can understand trying to find the mix after Cosby left NBC and having to wait for the anchor shows of Seinfeld and Friends. But looking at the last 6 years, NBC has shuffled a lot of shows. It shouldn't take that long to hand the baton off.

Scrubs is in its 8th season yet only spent 3 years in the Thursday night slot. NBC stuck The Apprentice on Thursdays to hand The Donald a built-in audience. But really, can't NBC let some shows get an audience before shuffling them about? Seinfeld took a while before people got the show. So did 30 Rock.

The answer: Frasier replaced Seinfeld for two years.
Posted by Mike Bull at 9:13 PM No comments: 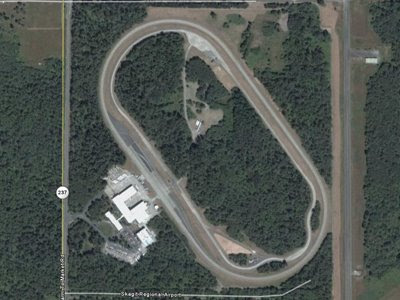 So who can guess where this track is? It's roughly 1.6 mile oval, about 50' wide, and dang symmetrical. Likely banked, if you notice the change in width between the corners and straights.

All that's missing is some big grandstands, catchfence, multi-lane access, and a clean infield, you got yourself a nice racetrack, possibly NASCAR worthy.

The current occupant could build a new facility nearby. I think this could work.
Posted by Mike Bull at 6:45 PM No comments:

It's not a Leatherman. It's not a Victornox Swiss Army Knife. Not even the useful zip-tie comes close. So what is the best multi-purpose tool?

Duct tape. I think most everyone will agree. It can be used to harness things together, patch things up, wrap presents, clean things, use as identification markers, and numerous other things that I'm sure others have used duct tape for (other than taping up ducts). Even hundreds of years in the future, Ellen Ripley used duct tape to combine the lethal assault rifle and grenade launcher with the fearsome flamethrower. Apparently even in the future nothing is so versatile as duct tape.

So what other uses is duct tape good for?

Related, the old saying: to a guy with a hammer, every problem looks like a nail. What if you have duct tape?
Posted by Mike Bull at 5:36 PM No comments:

The hardest I laughed watching this was at 1:39.

Coming up in the chain is governments, particularly the military side. 28 Days Later, Children of Men, The Unit. Government agencies running unchecked, running their own agenda.

Now I know this is fiction-based material, with the notable few exceptions (Flash of Genius), but the creative possibilities mixed with true stories bring up rabbit-trail line of thinking.

And based on my experience, it won't be too long before the quote "And I can see Russia from my house," by Tina Fey impersonating Sarah Palin becomes fully attributed to the Governor. Because we know who the real bad guys are.
Posted by Mike Bull at 12:18 PM No comments:

Your Moment of Zen

Still on the political kick...

Like 95% of my generation, I get most of my political facts and decision making information from The Daily Show on Comedy Central. Their unbiased reporting condenses the main points of the candidates and illuminates the clarity of traditional political double-speak. Just kidding about the first part. TDS really does a good job at lambasting both sides, not just one or the other. It just depends on which side is making the most mistakes. Right now it's the Republicans.

What I don't care for is the breadth of political "pundits" that sit on the sidelines offering no real benefit to advancing the political process. Since journalists should be objective and unbiased, they are left with describing the success or failure of their presentation of answers. I would think that the viewers would be able to see that for themselves.

I would like to see the "pundits" replaced with people that are normal people. Let's see what they think of the responses. Did they make sense? Who's blowing smoke and who's doing something? Who attacks and deflects rather than makes a point? Maybe if that happens more people will actually turn out and vote because they are being connected to. We're not all touring the lecture circuit or working full-time as a political consultant.
Posted by Mike Bull at 1:02 PM No comments:

"You got to stand for something, or you'll fall for anythang," Aaron Tippen

Seth Godin has another *ding* moment. What makes this country great is the ability to find/do/enable/act/believe/endorse/be whatever is permissible by law and our Constitution.

Unfortunately, our political parties, however fundamentally different, seem to be the same. Completely non-committal, confusing, and horrifically purposeless. In effort to appeal to the masses, they (the candidates) are trying to not offend the masses. Questions are answered long-winded like a US History test when you don't know the answer. Lack of knowledge is never trumped by verbose ambiguity.

I predict this year's election will be the lowest voter turnout because the candidates seem apathetic to the masses. They are more concerned with the Washington Two-Step and avoiding "embarrassing" (since when are beliefs/morals embarrassing?) soundbites that will be used on The Daily Show.

To candidates: Answer the questions succinctly and simply. Foreign policy? How about domestic policy? What are the candidates going to do for the people of the US? Pro-choice or pro-life? That doesn't really matter because the POTUS doesn't make laws (check & balances simplified point) and has nothing to do with running the country. It's our Senators and House of Reps responsibility to make the laws. They are the ones who need to answer that question.

Many people are arguing our economy needs to be fixed. How about we fix the political party process while we're at it? Neither of the current candidates really will do the best job. The American public is stuck with the lesser of two evils.

What do I suggest? How about American Idol + The Apprentice style election? Seriously. A 20-week process where we learn about the candidates. After the first 10 weeks ends, "We the People" begin voting off the ones we don't like. Of course this depends on the accuracy of our voting process and the Electoral College. Eliminate the "Campaign Trail" and give the people access to candidates lives by showing how much time they spend with the real movers and shakers ($$$$). IDK, it's just an idea.
Posted by Mike Bull at 10:57 AM No comments: