My last post I brought up the point that starting a second race team will probably be similar to starting a second church. Of course that statement is a bit simplified, but I think concepts exist between the two teams that similarities will overlap.

Speaking of teams, if you haven't read Roger Habich's blog, he is focusing on the Total Velocity Motorsports team. Eventually he will get to a couple of team members that play a back-stage role that is really important in projecting the excellence of the race team. They may not be able to be at the track during race day, but the job they do is top-notch and appreciated by everyone who works on the car. It is an example of all the men and women behind the scenes that pull off a Sunday morning experience at TRC.

And segue back into my two-team management and interaction model:

The [unscientific and unproven] laws of 2 [1 established, 1 new] teams:
1) Team leaders will always help or guide the team in most need.
2) Not every team will be equal or treated equally.
3) The same thing in one team won't necessarily work in the other.
4) Each team has a different communication mix.
5) Tools can be shared between teams, but crucial (read: expensive) tools have to be doubled.
6) Economies of scale do not apply in regards to physical things. Creative and intellectual, yes.
7) If everyone is focused on the same goal, no one should feel left out or discouraged.
8) Be prepared to fight for some territory between teams. Just hug it out. Hug it out.
9) Sometimes teams will have to hunker down and ignore the other just to be focused on the goal. It doesn't mean there is tension or they don't care. See #7.
10) Team notes are to be shared. Keeping them separate is key, but definitely share them and make them accessible.

If I don't go ADD, I'll try and explain each point and provide support for my thoughts.
Posted by Mike Bull at 12:51 AM No comments: Links to this post

I got called off the bench this week- the #70 race car was out along with the #76. Some people may think two cars is not that much different than running one car. Whatever you do to one car, you do to the other, right? Uh, not exactly.

After a practice day, the TVM race team brought home two cars, one of which was clanking. The clank was the new rear end, and it happened to be the #76 car (gunning for a NASCAR State Championship). Since the practice was on a Friday, not all of the team could be there; and with two cars work actually doubles at the track. There is no economies of scale in racing. Buying in bulk doesn't work in the racing world unless it is rags from Costco or Sharpies from Staples.

Saturday morning I picked out some tires to race and practice on. Put some finishing touches on the #70 car and loaded for the track. The #76 was still on jackstands. The team pulled out a set-up change out of the hat and threw everything but a new steering wheel at the car.

At the track it felt like old times when I first crewed on a late model car. At the track it was usually Roger, Steve (crew chief), me, and Roger's buddy Scott made most of the races. This week it was Jeff, Eddie, Dan, and me. We made two practice sessions, which was valuable seat time for Jeff. He was able to build from Friday's practice and race against some folks in practice.
About 35 minutes before practice ended, the #76 car rolled in and unloaded and made the final practice. A few crucial laps were all that was needed for Roger and the team to feel confident in the car.

For those first minutes when the #76 arrived, a minor chaotic storm brewed as everyone was hurried to get the #76 car on the track. It was the first real race where two cars needed to be prepped, set-up, supported and managed by the team. I made some observations about our work flow, as I've always dreamed about overseeing a multi-car operation. I've also kept in mind that TVM is fairly young as a team, with some racing veterans.

This might be long-winded, as my posts often are, but it struck me as we were getting ready to qualify. Running a two-car team, one veteran and one rookie, is going to be a whole lot like starting a new church. But I'm saving that one for later.
Posted by Mike Bull at 12:15 AM No comments: Links to this post 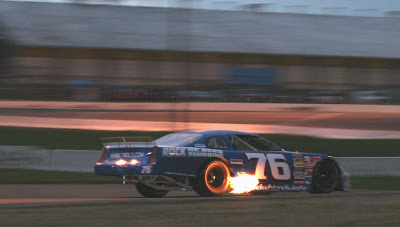 Posted by Mike Bull at 11:35 PM No comments: Links to this post

from imdb.com: But Ann Hornaday in the Washington Post suggests that the movie may be ill-timed. "Blacksburg is still numb. The rest of us are still reeling. And Hot Fuzz, which pokes fun at America's fetishistic gun culture while deliriously wallowing in it, now arrives on screens striking a tone of antic overkill that, from its giddy lock-and-load sight gags to its climactic shootout on a placid village green, right this minute seems oddly tone-deaf and tasteless."

The Virginia Tech shooting is definitely tragic and my heart goes out to those that are affected by a crazy person. But condemning a movie that was filmed last year and has been known about for months just because it is released the weekend after a horrible event is close-minded and hyper-politically correctness-sensitivity overboard.

If you didn't like the movie (Hot Fuzz, a British parody of American action/cop/buddy movies), just say so. Don't bring in outside news events that just happen to correlate to a minuscule degree. If Ms. Hornaday is trying to call the film distributors to act with corporate responsibly, maybe she should call on the news stations that blare the non-stop violence 24/7 when an act of violence happens.

If Ms. Hornaday is using this viewpoint to explain why the movie may not do well at the box office, I think she should focus on her job and review movies, not estimate movie grosses or call it "tasteless".
Posted by Mike Bull at 9:10 PM No comments: Links to this post

I'm watching LOST online right now. My point is something that is simply obvious to me, and don't know how it got overlooked by the writers.

Why doesn't Jack (and Juliette would need to be persuaded) lead everyone back to the village and everyone can sleep in a regular bed, have water, maybe electricity. How did this plot GRAND CANYON skip the creative LOST team?

Wouldn't someone on the island be asking all these questions about Jack and where he was, etc? I know if all these folks came back alive, I'd be asking where they were, how to get back, and move there.
Posted by Mike Bull at 5:19 PM No comments: Links to this post

"I've seen it on ESPN. The coverage is excellent." (DoT)

So head over to Evergreen Speedway's website and on your left is a non-scientific poll (alright, popularity contest) on the early pick for track champion. Roger Habich currently is in 2nd place. We need to vote him up to 1st.

Internet- be a focused laser beam and skyrocket Roger to the top!

And here's a pic for views: 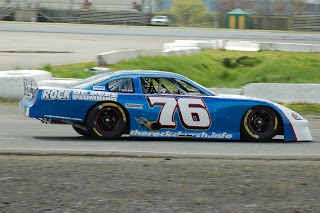 Posted by Mike Bull at 8:58 AM No comments: Links to this post

I've been listening to Hootie & The Blowfish lately. I love college rock; songs that tell stories.

Back on track-
I was perusing CMS and came across this little ditty and laughed. It was a blatant copy of Fellowship Church's series. The graphic FC has up isn't what they were running with during the series itself. But the concept is very similar. There is a site affiliated with CMS, Fickr, which has a bulletin board for comments. One comment called out the copier, who replied to the effect: we didn't copy, we took their idea and made it our own.

It brings up a murky point regarding information- what is truly accurate for information on the web? Some prescribe if it's on the 'Net, it must be true. Or if it comes in an email, it's as good as gold.

Information has to come from a verified source, and one must consider the integrity of the source. Take this blog for example. Most everything is my opinion on a wide range of subjects. My disclaimer at the bottom states that. As is my personality, I cringe when I know something I posted or have seen posted is not accurate. Because ultimately, decisions are made on available information, so that better be right. Else you end up in Cleveland, not Cle Elum.

Make sure the information you receive is accurate; check multiple sources. And cite your sources. Me, Myself, and I are not credible information sources, fyi.

So if you copy an idea from a HUGE church, don't think others have seen the source material and call you out. As my pastor has said many times before, my generation has been let down by every major institution- church (scandals), Wall Street (financial collapse), government (Bill C.), etc. We don't need the Internet to fail us or the generations to come.
Posted by Mike Bull at 8:35 PM No comments: Links to this post

"I want a white house with blue shutters." (TN)

Where to begin? It has been a busy, busy two weeks. After working on Easter service preparations and the stage redesign, today has been a welcome day of rest. Now that the stage is up, let me explain our concept through the development process.

1) Meet to discuss layout, changes, goals to be accomplished with new stage
a) Move drums and sound cage out of side sightlines to the video screens
b) Change aspect ratio to 16:9 screens from 4:3
c) Add space to stage for more room for worship team
d) Add space for intimate speaking platform
2) Come up with a design
a) Something different than previous design
b) A concept that adds height to stage
c) A concept that adds background in video display
3) Determine materials and obtain cost for budgeting
4) Determine color palette and texture
5) Obtain materials and begin pre-build
6) Clear stage of previous set
7) Finish build onsite
8) Begin ideas for next stage concept

Things come up during the concept build, and everything evolves within the concept. Our current stage is a version of our concept, but far from exact. Adjustments had to be made, but I think everything came out fine.

I'll attempt to get some pics of the current stage up.
Posted by Mike Bull at 6:48 PM No comments: Links to this post